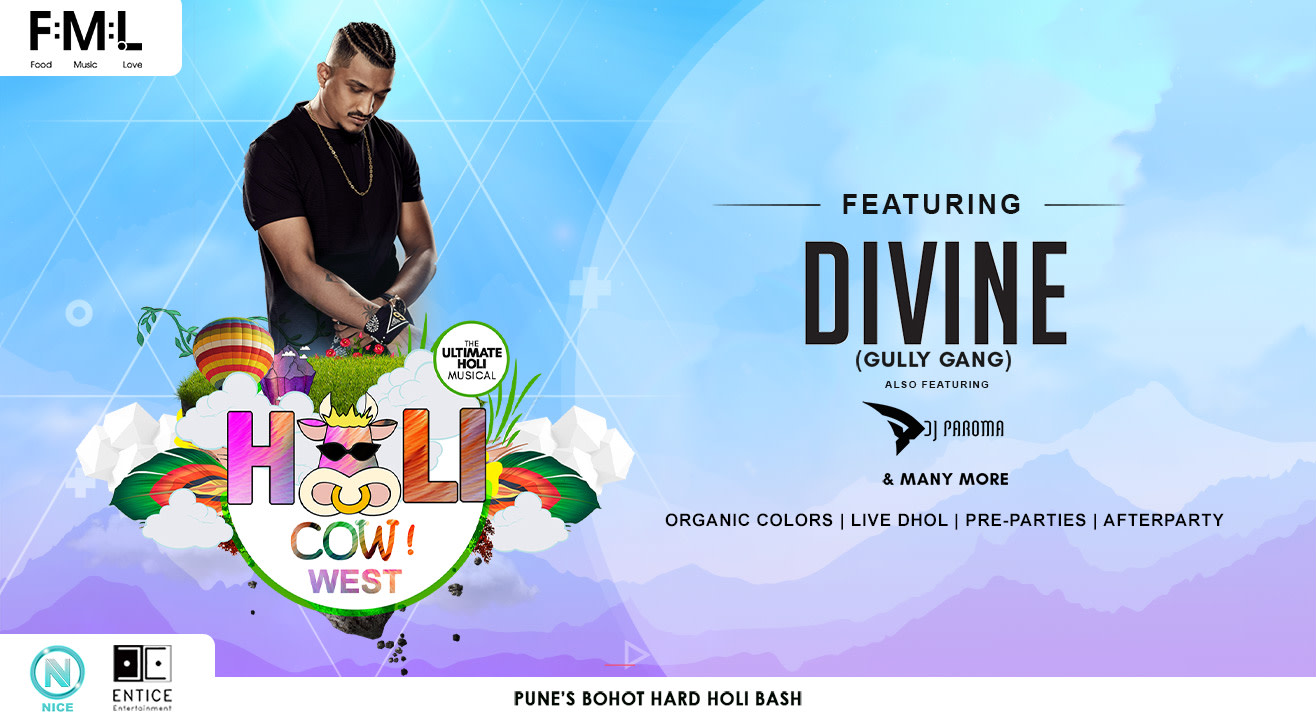 PLEASE NOTE: Divine will be performing at FML Hinjawadi Arena with a capacity of 6000 people and not in the lounge. All you have to do is reach FML Hinjawadi and we will guide you from there.

The coolest Holi destination of Pune is back with it’s fourth edition. Presenting “Holi Cow West 2020” for a more rejuvenated Holi. We’ve got Divine as the headliner and many more artists in the line up. Live Dhol, Organic Colors, VIP experience-just to name a few. There’s a lot more in store.

The rise of hip-hop in India has coincided with the emergence and rise of DIVINE, considered as one of the most popular rappers and hip-hop artists in India. With awards and accolades to his name, DIVINE’s fiery, anger-spitting verses have struck a chord with everyone from Dharavi to Darjeeling. Central to rise of the ‘gully rap’ movement, with hit sin-gles like ‘Meri Gully Mein’, ‘Jungli Sher’ and ‘Kaam 25’, DIVINE’s brutally honest Hindi rap draws inspiration from his own life and the streets of Mumbai, set to beats that wouldn’t be out of place in a Los Angeles studio. The year 2016, which proved to be DIVINE’s breakthrough year, started off on a bang as he released ‘Jungli Sher’, an autobiographical song. His collab with Nucleya on Jungle Raja won laurels and an award at GIMA. Soon after, DIVINE reached new fans and new heights when he became the first Indian artist to be fea-tured on BBC 1 Xtra’s ‘FIRE IN THE BOOTH’ in 2016. DIVINE also performed at the BBC Asian Network Live at Apollo. His 2017 single, ‘Farak’ topped the Indipop charts on iTunes India, and was also featured on the radio show, Beats1 & played out in over 100 countries. Bollywood came calling soon after and DIVINE made his Bol-lywood debut with ‘Paintra’ in Anurag Kashyap’s Mukkebaaz (2017), collaborating with good friend Nucleya.An electric live performer, DIVINE’s shows are as entertaining as they are inspiring for his young fans. His live set-up now features charismatic musicians like drummer Jai Row Kavi, guitarist Randolph Correia and bassist Krishna Zaveri making it no less than a supergroup of talent and starpower. DIVINE’s story and rise of the Indian hip-hop scene has also inspired Bollywood director Zoya Akhtar’s Gully Boy, starring Ranveer Singh. Gully Boy also sees DIVINE in action on five tracks, includingco-writing a song, ‘Doori, with the legendary lyricist Javed Akhtar. In addition to being one of the music industry’s most bankable stars, DIVINE has also added entrepreneur to his bag of feats. Gully Gang Entertainment, a multi-purpose entity will serve as a record label, Gully Gang Records, unearth and manage new and exciting hip-hop talent, create live music IPs in addition to other things. INTERVIEWSBehind The JourneyHdfc LifeFilm Companionwith Anupama ChopraGully Boy Interviewwith Beats1DIvine& Raja Kumari on Son Of Abish S3DIVINE is all set to release his debut body of work titled ‘KOHINOOR’through Mass Appeal/Gully Gang in 2019