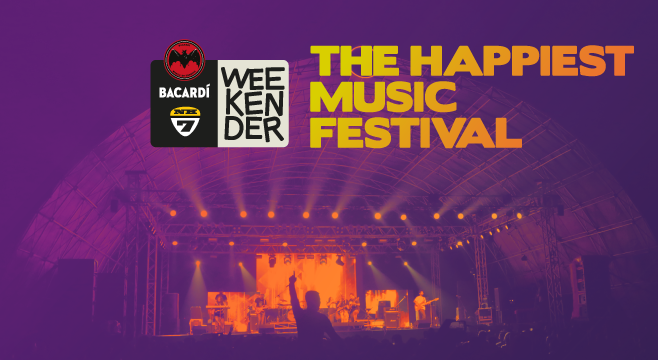 Bacardi NH7 Weekender is back for its seventh year, and its even more special! Catch the happiest music festival in the abode of clouds, Shillong (Oct 21-22), in historic Hyderabad (Nov 5-6) where the festival takes place for the first time ever, and in Pune (Dec 2-4) where it all started. Watch out for amazing new artists, iconic favourites, specials and finds at the food and flea bazaar, art and installations, and take home a lifetime of memories!

One of the most anticipated music festivals in India, Bacardi NH7 Weekender is all about the music, the vibe and a true music festival experience.

-The seventh edition: That’s right! Bacardi NH7 Weekender is coming back to Pune for it’s seventh edition.
-Loads of artists: As always, we promise you a kickass line-up with the coolest artists.
-A weekend plan: No need to apply for leaves (except maybe one). Enjoy the festival guilt free.
-Happiest music festival: With music, dancing, buckets and shiny people, the happiest music festival is ready for you.

Steven Wilson
One of the most eclectic and prolific artists of rock music, Steven Wilson his the man behind prog-rock band Porcupine Tree. Porcupine Tree explored psychedelia, progressive music, and his love of ambitious seventies music. When in 2010, Porcupine Tree went on a hiatus, Steven continued to compose solo works and has since then churned out five albums.

Jose Gonzalez
Sweden’s José González is just such a voice. He first charmed his way into the UK’s earshot via the murmurous and elegant, classically finger-picked folk pop of his 2005 album, Veneer. Two years later came In Our Nature. Since then, Jose has toured across the world, and also started his more fulsome, electronic-edged pop project Junip.

The Joy Formidable
The Joy Formidable released their debut album ‘The Big Roar’ after signing worldwide with Canvasback Music, a division of Atlantic Records. The band started their own label, created a studio, and recently released their third full-length album Hitch in March 2016, an evolutionary step forward from its predecessors The Big Roar (2011) & Wolf’s Law (2013).