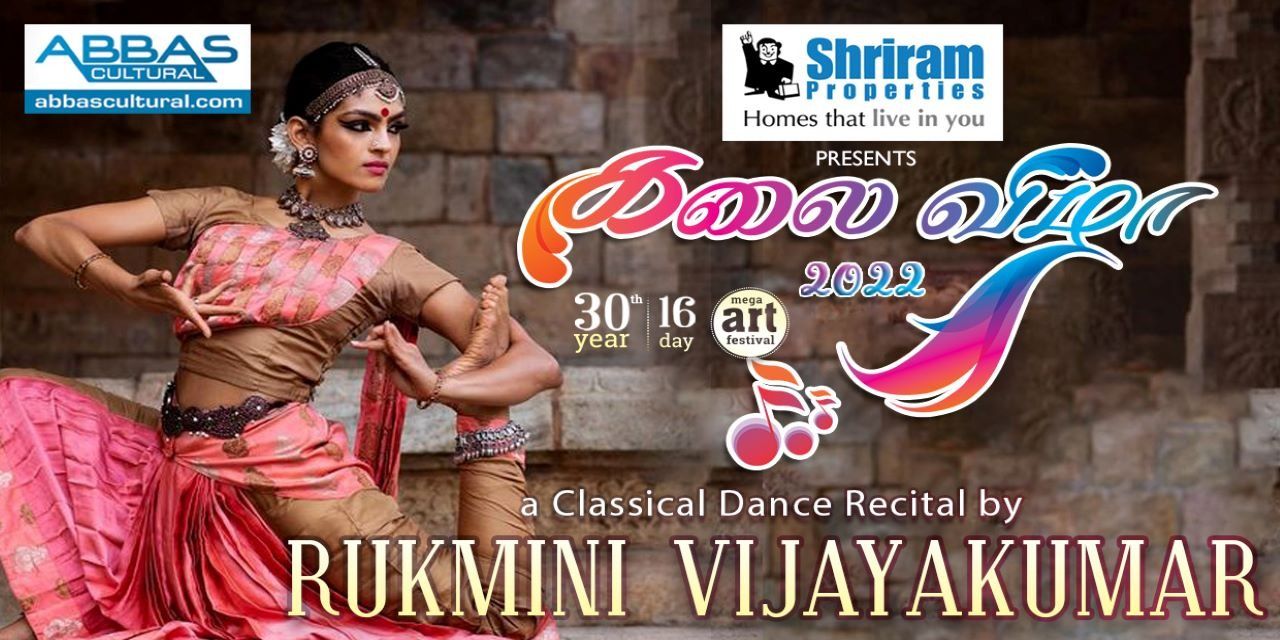 Why should you attend?
To witness a Captivating Dance Performance
For Classical dance lovers
To promote & support Indian Art, Tradition and Culture

About
Kalai Vizha – is a flagship cultural event of Abbas Cultural for the last 29 years. When it was started, Dr.K.J.Yesudas, who is the mentor of this Kalai Vizha, had aptly suggested to have this classical cultural event towards the conclusion of the Margazhi music season and towards the beginning of the new year.

Our 30th year Annual Art festival Kalai Vizha will be at YGP Auditorium, PSBB School, T.Nagar from 1st January to Jan 16th (continuously for 16 days). Daily 2 concerts are planned one at 4.30 p.m and another at 7.00 p.m.

Rukmini Vijayakumar is an Indian choreographer, Bharatanatyam dancer, and film actress from Bangalore.[1][2][3] Along with her performances on stage, she has appeared in South Indian films such as Bommalattam (2008), Ananda Thandavam (2009), Bhajarangi (2013), Kochadaiyaan (2014) and Kaatru Veliyidai (2017).

Rukmini Vijayakumar is the artistic director of Raadha Kalpa dance company, and the director of LshVa, an art space. She is the founder of The Raadha Kalpa Method, a pedagogical system of training classical Indian and particularly Bharatanatyam dancer.

Rukmini`s approach to Bharatanatyam is dedicated, rigorous and layered. She has presented her work as a soloist all over the world, including venues such as the Jacobs Pillow festival, Drive East NYC, and the Korzo Theater. Recently she played ‘the goddess of love’ in ‘Sukanya’, produced by The Royal Opera house in London.