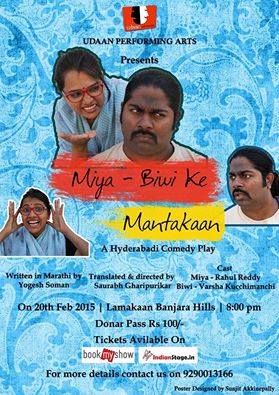 About The Play – The story is a hilarious take on the ‘mantaka’ between a typical hyderabadi couple – The wife, an ever worrying mother of two daughters and her husband, who’d rather take life as it comes.

One day, the wife decides that starting a business on their own is the only way to ensure enough money to pay for her daughter’s wedding. Her husband prepares her by presenting her with hypothetical, borderline silly, scenarios, she is likely to come across during the course of running the business.
What are her business plans? Is she dissuaded from her grand scheme of things by her husband?
Watch Miya Biwi ke Mantakaan on