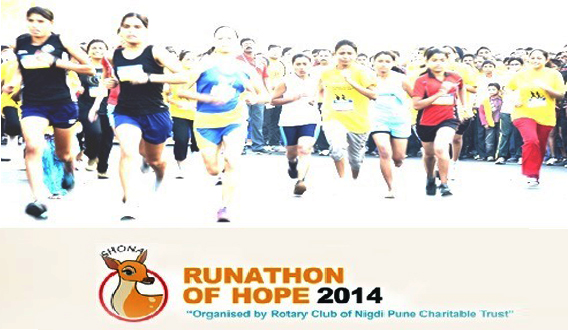 Runathon of Hope is a “Half Marathon” – An Annual Charity Run organized by the Rotary Club of Nigdi, Pune attracting participation from athletes, schools, colleges and corporates totaling to over 10000 persons & an equal number of spectators. The event is recognized as a State Level Event, by the Maharashtra Athletic Association. This is the fourth consecutive year of this event and is growing bigger with each year.

The race route is a highly visible road track in PCMC area which is one of the largest and fastest growing Industrial, Educational and Residential suburbs in our country.

The object of holding the half marathon The Runathon of Hope, is to raise funds for various community service projects. The fund raising model adapted is such that the donors may direct the use of funds donated by them to execute a number of well-conceived, socially useful projects which involve demonstrable and transparent use of money towards community service.

• The event promotes health consciousness in society and encourages sports talent from school children from poor strata of the society
• The event proceeds are deployed toward CSR projects in a transparent manner
• Only projects which involve demonstrable and verifiable use of money are chosen
• The projects are executed by a team of dedicated Rotarians ( the donors / sponsors may also participate in the same)
• The Donor / Sponsor may direct the execution of a project of its own choice and area
• Donations and Sponsorships are eligible for 80G benefits under Income Tax
• A widely publicized event in all media such as TV, radio, hoardings, internet etc. giving great visibility and positive publicity