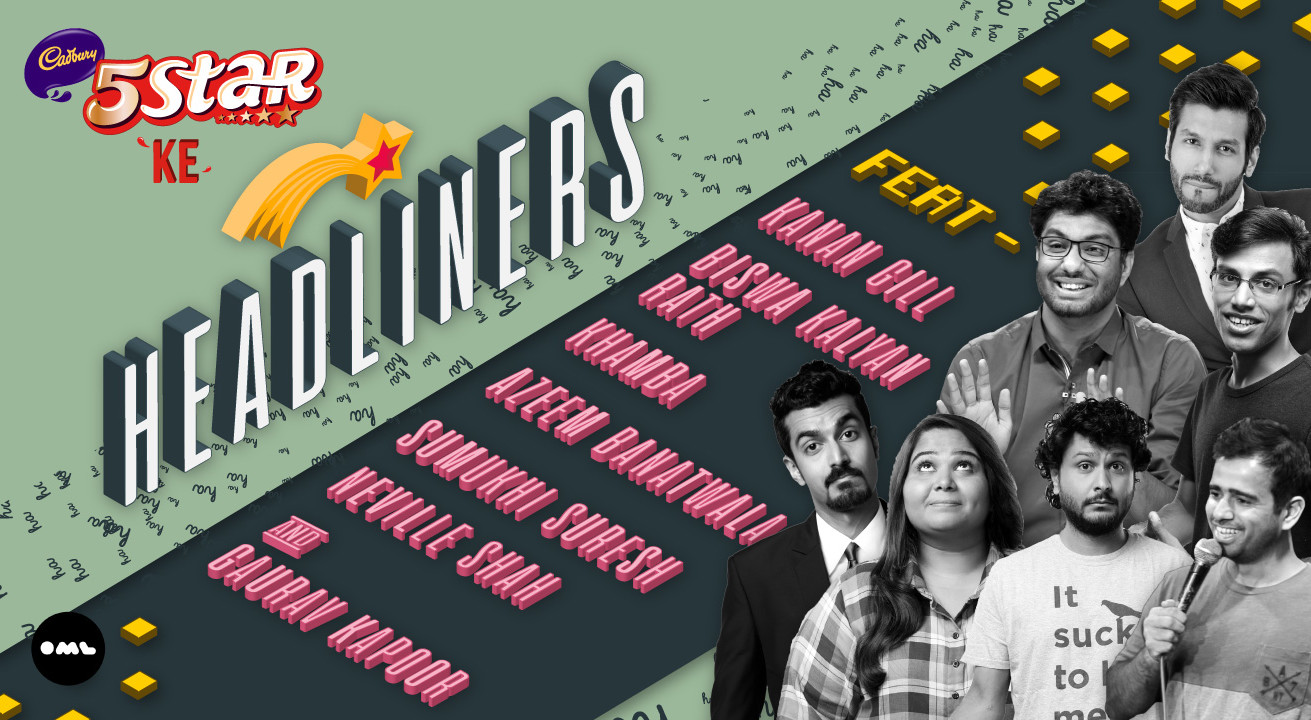 This is the ultimate in comedy! One night, four (or more!) top comics. It’s a breathless evening of laughter. As soon as you’re done ROFLing over one set, comes some LOLs from the next. It’s a glorious celebration of some of the biggest names in comedy, all under one roof… A roof that is constantly in danger of falling down because of all the laughter that ensues.

This is the ultimate in comedy! One night, four or more top comics!

It’s a breathless evening of laughter featuring top acts such as Kanan Gill, Biswa Rath, Khamba, Azeem, Sumukhi, Neville Shah & Gaurav Kapoor. As soon as you’re done ROFL-ing over one set, you’ll face some LOLs from the next. All in all, a glorious celebration of some of the biggest names in comedy, all under one roof… A roof that is constantly in danger of falling down because of all the laughter that will ensue.

With his razor-sharp wit, Kanan is one of India’s most popular sketch and stand-up comedians in the country. The Mumbai-based comic has performed over a 1000 shows around the world and his recent comedy special, Keep It Real, was received with rave reviews. The man (who was only a boy back then) shot to fame with the hit Pretentious Movie Reviews series, with fellow comedian Biswa Kalyan Rath. He also dabbles in sketch comedy (acted in How Insensitive! and the acclaimed mock-umentary Better Life Foundation by Them Boxer Shorts) and stand-up (toured India with two hour-long shows: Feeling with Kanan, and All Correct Opinions). He made his Bollywood debut with the 2017 release, Noor.

Remember the Pretentious Movie Reviews on YouTube? Good. Now forget them. That was just a warm-up to comic Biswa Kalyan Rath’s full comedy prowess. The comedian has moved up a few notches since his YouTube glory days and is using his IIT-Bombay education, along with his knowledge of mathematics, language and life, to make jokes that have never been cracked before. He recently released his comedy special, Biswa Mast Aadmi, to rave reviews, with which he toured every pocket in India. Soon after, he released “Laakhon Mein Ek,” a surprisingly dark web-series on the IIT coaching industry. One of the most-followed comedians in the country, Biswa’s angry rant-styled delivery and his unique perspective turns every topic he touches into comedy gold, making audiences crack up instantly. The stand-up comedian, writer, actor, size-zero enthusiast and blogger has done countless shows across all sorts of venues in the country and has managed to garner 14+ million views on YouTube. Need anyone say more?

One of the smartest (and tallest) comedians in the country, Gursimran Khamba is the co-founder of popular comedy collective, AIB. He’s been a stand-up comic since 2009, often employing dark and surreal themes. As part of AIB, he has been a part of the collective’s ambitious projects such as AIB Knockout (India’s first ever comedy roast), AIB Diwas (a full-day open-air comedy show), On Air with AIB (the satirical news show telecast on prime-time television and Hotstar), and AIB Presents Royal Turds (a Bollywood-themed spoof award show). He has performed several stand-up clubs and corporate shows. As a writer, he ran a hugely popular blog, and contributed to Firstpost, DNA, GQ India, India Today, HT Brunch and more. His television credits include The Indian Television Awards, Jay Hind! and MTV Rock The Vote. Currently, he is working on an Amazon Original show – The Ministry – featuring leading actor Irrfan Khan, set for global release in 2018.

Clocking in more than 150 shows every year, Azeem Banatwalla is one of the most in-demand comics in the country, and was rated as one of the top comedians in the country by CNN-IBN. Employing his bawa sixth sense and acerbic wit, Azeem’s comedy cuts through like a knife, proving to be refreshing and immensely engaging. He has two stand-up specials to his name: Out of My System and Cometh the Hour, the latter of which is on Amazon Prime. He has shared the stage with international acts such as Dwayne Perkins, Andy Zaltzman and Ron Josol. He is a member of popular comedy collective East India Company and has performed sketch comedy, topical news comedy (EIC Outrage) and specials such as EIC vs Bollywood. He is currently working on new comedy material on stage!

Actress, writer and stand-up comedian, Sumukhi Suresh is one among the most exciting talents in contemporary Kannada entertainment industry. Hailed in some circles as “India’s Tina Fey,” Sumukhi first rose to prominence through YouTube sketches and the mock-umentary web series Better Life Foundation, and subsequently starred in the titular role in the acclaimed Amazon Prime show Pushpavalli. Notable among the actress’ feature film credits is the 2018 Kannada satirical comedy Humble Politician Nograj.

A journalist by qualification, Gaurav Kapoor is another by-product of the famous Bollywood Kapoor family. Not really. The comedian is a sweet Delhi boy who does what he is expected to – hold a respectable job (he has one in retail) and make people laugh when needed (his secret profession). His razor sharp wit and candid humour lead him to win almost every open-mic he has ever participated in (yes, he is that good), including the Big Mic, Canvas Laugh Club, Chalta Hai and Buzz Off. So good, that he opened for the world famous comic Russell Brand on his Indian tour. His favorite topics to talk about on stage are Jaat culture, people who buy Royal Enfields and poverty (mostly his own); a variety that makes the Indian audiences fall in love with him. And with his recent spelling change (Kapur to Kapoor), he has got all the validation he needs, and is ready to take over the world.

A regular at comedy clubs around the country, writer and stand-up comedian Neville Shah has been performing on both international stages, and as well as in India. Known for his scathing point of view and his witty comic timing and repartee, Neville recently toured for and released his Amazon comedy special, What Are You Laughing At?. Prior to that, has done a nation-wide tour with his previous special, We Should All Kill Ourselves, a combination of self-deprecation, and blatant rhetoric on social change and societal double standards.He is also a member of SnG Comedy, a popular comedy collective that has amassed 470000 subscribers and 61 million views. Their content consists of sketches, stand-up, and a candid interview/chat series The Big Questionwhich has featured several popular guests.