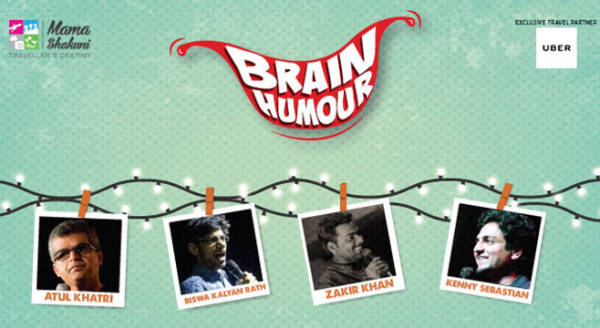 Join these four stand-up comedians, as they take the stage and make you laugh with their jokes and sketches. The comedians for the night are:

Biswa’s style of comedy can be best described as angry rants bordering on what’s socially acceptable. Biswa is a philosopher, a self-proclaimed stand-up comedian, writer, actor, size-zero enthusiast, blogger and an ex-IT professional.

Zakir khan is one of the the brightest comedians in the country and was the winner of Comedy Central’s hunt for Best Stand-Up Comic of India and Foster’s Lol Evenings. A writer by profession, this ‘Confused Desi’ serves his take on modern India, with a hard to resist rustic humour that’ll have you nodding your heads and clapping as you’ll relate to everything he says.

Atul Khatri is a 40+ guy. We’re talking about his age, not IQ. A Mumbai-based businessman who realised too late that he wanted to do stand-up comedy. He is from a decent double-income, two kids and strictly-no-sex family. He was one of the 3 finalists in the Melbourne International Comedy Festival contest which was recently held in Delhi.

Kenneth Sebastian or kenny as he is popularly known, is a stand – up comedian based in Bangalore. With over 1000 shows in the country, he has also performed corporate shows for companies like Google, Wipro, Infosys, Adobe etc. He reuglary performs in the Laugh Factory and the Comedy store in Mumbai