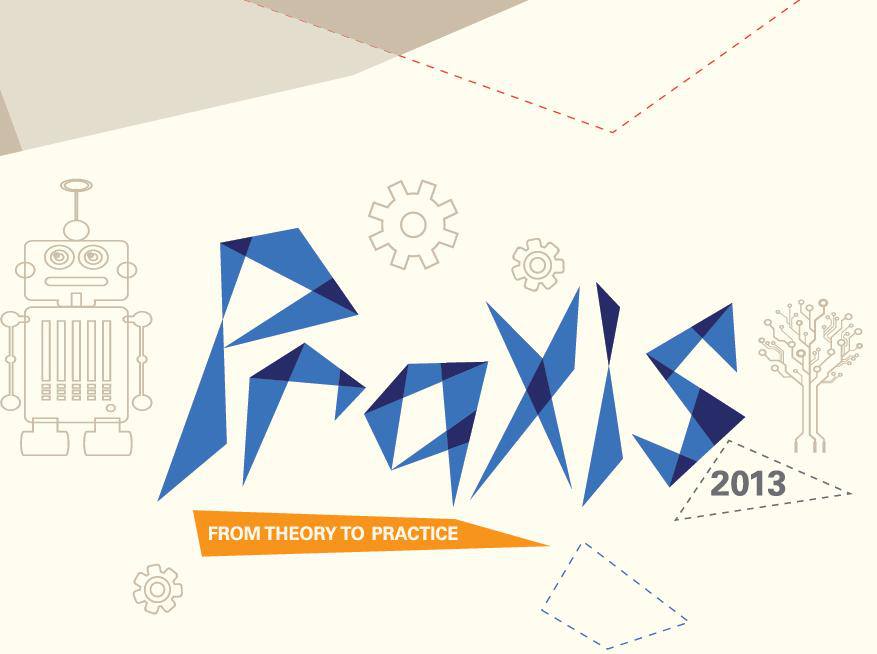 Vivekanand Education Societys Institute of Technology is organising its annual technical festival which is called PRAXIS-2013 which is going to be held on the 31st July and 1st August 2013.

Established in 1984, Vivekanand Institute of Technology is one of Mumbais premier engineering institutes, which has been imparting high quality education and has striven to raise the bar of excellence. With this mega-event, VESIT opens vistas of technical advancement for budding engineers by allowing them to participate in competitions which test their grit, knowledge and skill.

The theme our festival this year is STREET ENGINEERING. With this theme we are trying to relate various events such as Robotics, Bridge the gap etc, with the corresponding hotspots in the world.

– C-Voyage
This C programming contest brings the best coders together competing in an intellectually stimulating environment. Participants have to develop optimal codes that work, are bug free and draw on efficient algorithms
Participate in a team of: 2
– Connect-i-cut
Connect-i-cut aims at testing the computer networking skills of the participants. In essence the event will involve a basic LAN setup, demonstrating successful communication between nodes on the network and carrying out a variety of tasks that are related to resource sharing.
Participate in a team of: 3
– Weave The Web
Given a theme on the spot, design your own website in a limited period of time with the given resources! Teams are allowed to use only a predetermined number of softwares like Photoshop, Corel Draw, Front Page, Dream Weaver and Paint..
Participate in a team of: 2
LAN GAMING
Counter Strike – Participate in a team of: 4
FIFA – Teams of 2
FIFA – Individual
Need for Speed
TREASURE HUNT
What’s common between “Pirates of Caribbean” and “The National Treasure”? The “Treasure” of course!!
Praxis brings to you an incredible hunt for treasure in the streets of Mumbai.
Pick up your crew, fuel your car and get ready to solve some conundrums and find the hidden treasure or be prepared to lose yourself in the labyrinth of puzzles.
Participate in a team of: 4

– Film it
Unveil the journalist in you by making a video report on PRAXIS. Capture all the events in a humorous way, not giving away the technical details. From the action on stage to that behind the stage all of it can make for a win here. So, zap it, capture it and FILM IT…Lights Camera Action!!!
Participate in a team of: 2
– Papyrus
Papyrus is a technical paper presentation event. Participants are expected to submit a paper that is based on research, systematic investigations or experimental analysis.
Participate in a team of: 3
– Mindbenders
Enter mindbender, a technical quiz which offers ‘the most’ geekiest ride to wisdom.
Killer rounds, video analysis and much more. Go on and test your mettle against the best. This event will lead you to the technology you’ll be a part of tomorrow.
Participate in a team of: 2
– Brainwave
After an overwhelming success last time brainwave is back!!! And how!!! From the technically informed to the lightning quick brains, this event will test your analytical thinking capability, your reasoning and deduction skills. Work your way through brainteasers, puzzles and unsolved mysteries. So, gear up for the clash of brains, right here at brainwave.
Participate in a team of: 2
– Renaissance
The renaissance that began in Europe ages ago has found it’s way at PRAXIS. For the culturally and technically advanced minds renaissance it is. Teams must come up with an idea, preferably technical, that is applicable, a problem with the society or the environment or any problem related to an industry. Just think it up and we’ll give you the platform there on.
Participate in a team of: 3
– Dalal Street
The biggest event of PRAXIS. It is the “dalal street” of VESIT, in the making. Bigger and grander than last year, it awaits it’s dalals. Put on your thinking caps and get the stocks rising!!
Participate in a team of: 4
– The Executive Suite
For all the Alpha’s out there, this will definitely show of the leader in you. This game tests the managerial skills in groups and in individuals. It seeks the young manager efficient to adorn the EXECUTIVE SUITE.
Participate in a team of: 4
– Naked Egg Drop
A fun event, in which participants have to drop eggs from ever-increasing heights onto the baskets engineered to withhold the egg w/o breaking it. So get on with the making of the box no egg can spoil…
Participate in a team of: 3
– Bridge The Gap
Fun, we love. The objective of this event is to design a well-engineered bridge that will hold weights. Mechanise your brains and model a bridge that will rock the weight (Literally).
Participate in a team of: 2
– Crystal Maze
This is it. The most craziest and awaited of all. The event that will offer you a respite from the plethora of technical events. Get a team, complete the tasks, earn points and find the crystal. The race begins in 5.4.3.2.1.
Participate in a team of: 4