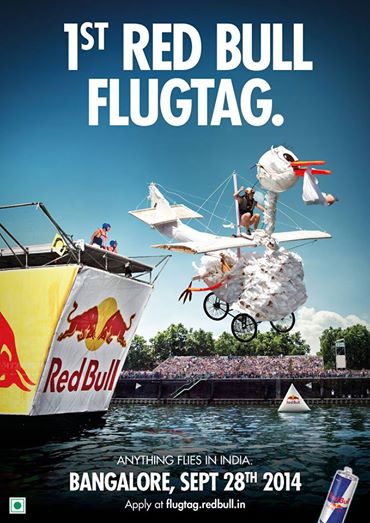 Red Bull Flugtag! A day when the bold take flight in homemade flying contraptions powered only by muscle, chants and the zeal of a true aviator. A four-member team designs, builds and launches their Flugtag craft off a 22-foot high flight deck, in the hope of soaring into the distance, with only clear blue water to catch their inevitable fall. 40 such teams will be selected for Red Bull Flugtag – India. The first Red Bull Flugtag (German for ‘flying day’) was held in 1992 in Vienna, Austria. Since then, more than 100 such events have taken place around the world, attracting up to 2 lakh spectators for a single event!

Participating teams don’t have to be experts in aeronautics, as Flugtag crafts are judged on 3 parameters: Flight distance, creativity of the build and showmanship. Over the years we have seen mind-bending contraptions like giant lobsters, flying tacos, dinosaurs, Wile E. Coyote, lego-crafts and even a fire-truck take a leap of faith off the flight deck. This year, Red Bull Flugtag comes to Bangalore.