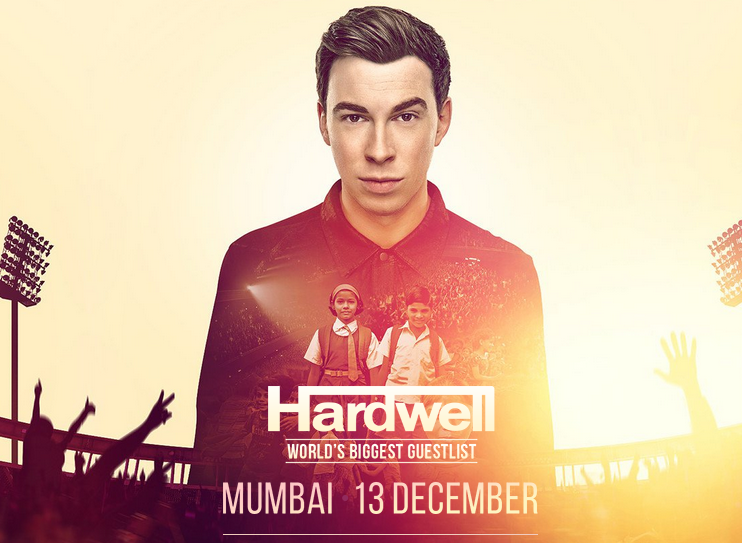 India is a country that continues to remain special for Hardwell. Since playing a headline slot at Sunburn to bringing his famed I AM Hardwell world tour concept to Indian cities in Bangalore, Delhi and Mumbai, the Dutch maestro’s affinity with India has only continued to grow.

On Dec 13, 2015 Hardwell will return to Mumbai, India to host an exclusive launch show that will not only go down in the history books of live entertainment, but more importantly will see him become the ambassador of a new charity project that will provide education for children in India, around the world. Additionally, this launch show will attempt at breaking the Guinness World Record for the “World’s Biggest Guest List” with Hardwell opening up his own personal guest list, so fans can attend this ambitious, once-in-a-lifetime affair, for free.

Set-up by Hardwell and the international electronic music agency, Anna Agency, the United We Are Foundation is a springboard charity project that has been conceived following the worldwide reach of the World’s #1 DJ Hardwell’s debut artist album, United We Are, and tour concept I AM HARDWELL – United We Are. Created as a way to ‘give something back’ to the children of the world, the United We Are Foundation is a charity project that Anna Agency CEO Anna Knaup says “is a globally ambitious endeavour to educate young children in different communities around the world”.

First launching in India and then travelling to different countries around the globe, the United We Are Foundation in association with United Welfare Trust will undertake in an international development agenda that will aim to deliver a ‘magic bus’ educational program to children in India.

India’s leading welfare trust for social cause awareness, founded and run by Shailendra Singh, United Welfare Trust, joins hands with Hardwell (World #1 DJ) and Anna Agency’s United We Are foundation, to create a social difference unlike any other in recent years, through their collective love of dance music. With a primary objective to unite the world of electronic music in order to make a real difference – starting with India, bringing Indian children out of poverty by nurturing them on a journey from childhood to livelihood. Commenting on the foundation project United Welfare Trust’s Shailendra Singh said, “Dance music has the power to make a social difference. By partnering the United We Are Foundation with United Welfare Trust in India, we will be able to take thousands of India’s most in need children all the way from childhood to livelihood. This movement will start in India and explode further around the world”.

Poised as India’s first ever dance music event on this scale and lined up to make a significant social difference, this new social project will start its roots first in India before taking its steps to other countries around the globe.

Fans from India and across the world, will have the option to pledge to the cause to become ‘part of the solution’ by donating. Booking agency Anna Agency and Shailendra Singh’s United Welfare Trust will ensure this vision becomes a reality through aligning their efforts alongside Hardwell’s and that of the United We Are Foundation, with all parities and contributing teams guaranteeing that all profits will be put back into the charity project and used to create the maximum impact possible towards the education of children in India. The event will be audited by Ernst & Young, one of the world’s ‘Big Four’ accounting firms. Hardwell’s and Anna Agency’s United We Are Foundation: India is set to be a legendary record-breaking occasion of our times and for the children of the future.