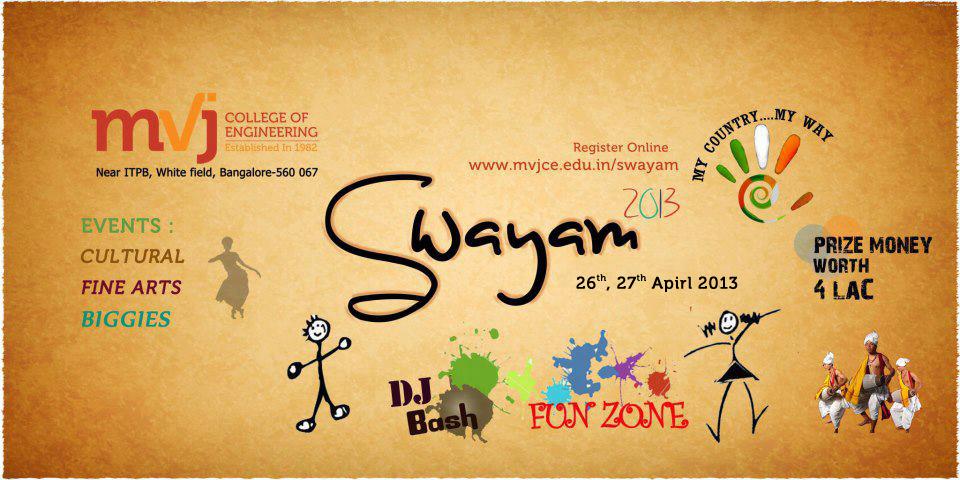 “It is a tradition of our college to organize an inter-collegiate cultural fest every year “SWAYAM”. It aims to show case the remarkable unseen talent among the students not just in cultural activities but also in managing the event. It is a blend of creativity and managerial skills which is splashed all over the event. Being in the arboreal setting of Whitefield with the religious backdrop of Brindavan the name by which Sai Baba’s ashram goes by, and the symbol of the state’s iconic silicon image of International Technological Park, SWAYAM presents a perfect setting for painting the hue of talent over a period of two days.

SWAYAM is the highlight of our college cultural activities and has been the most awaited event for the students. SWAYAM has been active from the past ten years and has grown to be a huge event ever since. Being a cultural hub, it has witnessed very good response from not only the hosts but other colleges as well. It has witnessed the likes of EUPHORIA, BOMBAY VIKINGS, PARIKRAMA, etc. The event was inaugurated by the gracious presence of the eminent personalities like late Dr.P.ASHWATH, Sri. PRAKASH SONTAKKI and other noted personalities. Standing tall to its name SWAYAM is back again this year to showcase yet another breath taking journey of cultural extravaganza. SWAYAM invites all to explore.

MVJCE’s annual cultural festival hosts over 50 colleges from around the state to compete. Swayam’13 has the following
Cultural events in Swayam