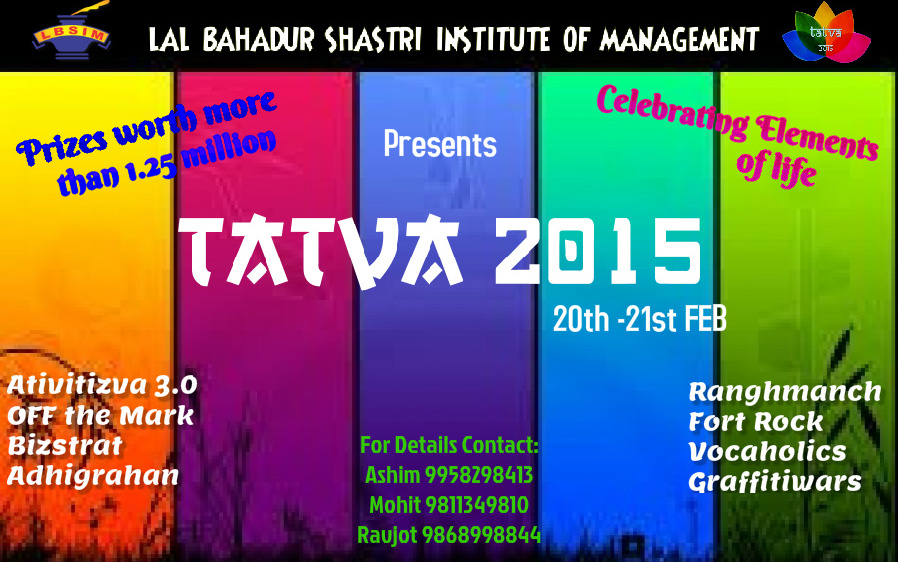 Etymology of ‘TATVA’
Tatva is a Sanskrit word meaning ‘thatness’, ‘principle’, ‘reality’ or ‘truth’.
According to various Indian schools of philosophy, a tatva is an element or aspect of reality conceived as an aspect of deity. Although the number of tatvas varies depending on the various philosophical schools they come from, together they are thought to form the basis of all our experiences.

TATVA 2015 – Celebrating the elements of life

Various competitions and games from different arenas of Management viz, Marketing, HR, Finance, Operations as well as cultural events like Vogue – The Fashion Night, Dance Competition and War of Bands are conducted in the two day festival.

The theme of TATVA 2015 is “Panchtatva: 5 elements of Life”. TATVA 2015 will be inaugurated by the world-renowned ghazal singer Padma Shri Pankaj Udhas. TATVA sees a footfall of around 3000 people every year.

Tatva ’14 was inaugurated by Padmashri Geeta Chandran, the celebrated Indian classical dance exponent. The festival included over 50 events encompassing diverse topics like politics, marketing, HR, finance and IT with over 2000 students participating from various institutes across India. Prizes worth Rs 1.25 million were given in two days. The most happening event of the fest was the MTS Rising Glow Party powered by DJ Nucleya, the Sunburn artist.

Tatva ’13, with Mahindra Rise as its title sponsors, was inaugurated by the famous musician Bhajan Samrat Anup Jalota on the 15th of February. The highlight of Tatva ’13 was a live performance by the Mumbai based band Pentagram led by Vishal Dadlani as part of the Star Night hosted on 16th Feb. The festival included over 30 events hosted by various academic clubs of the institute with students from various colleges around India competing for prizes worth Rs 1 million. A ‘War of DJs’ competition was hosted judged by DJ Tarun from Red FM 93.5 ‘Todu Night’ and DJ Sue (Sushein) of IPL Extra Innings T20 fame.