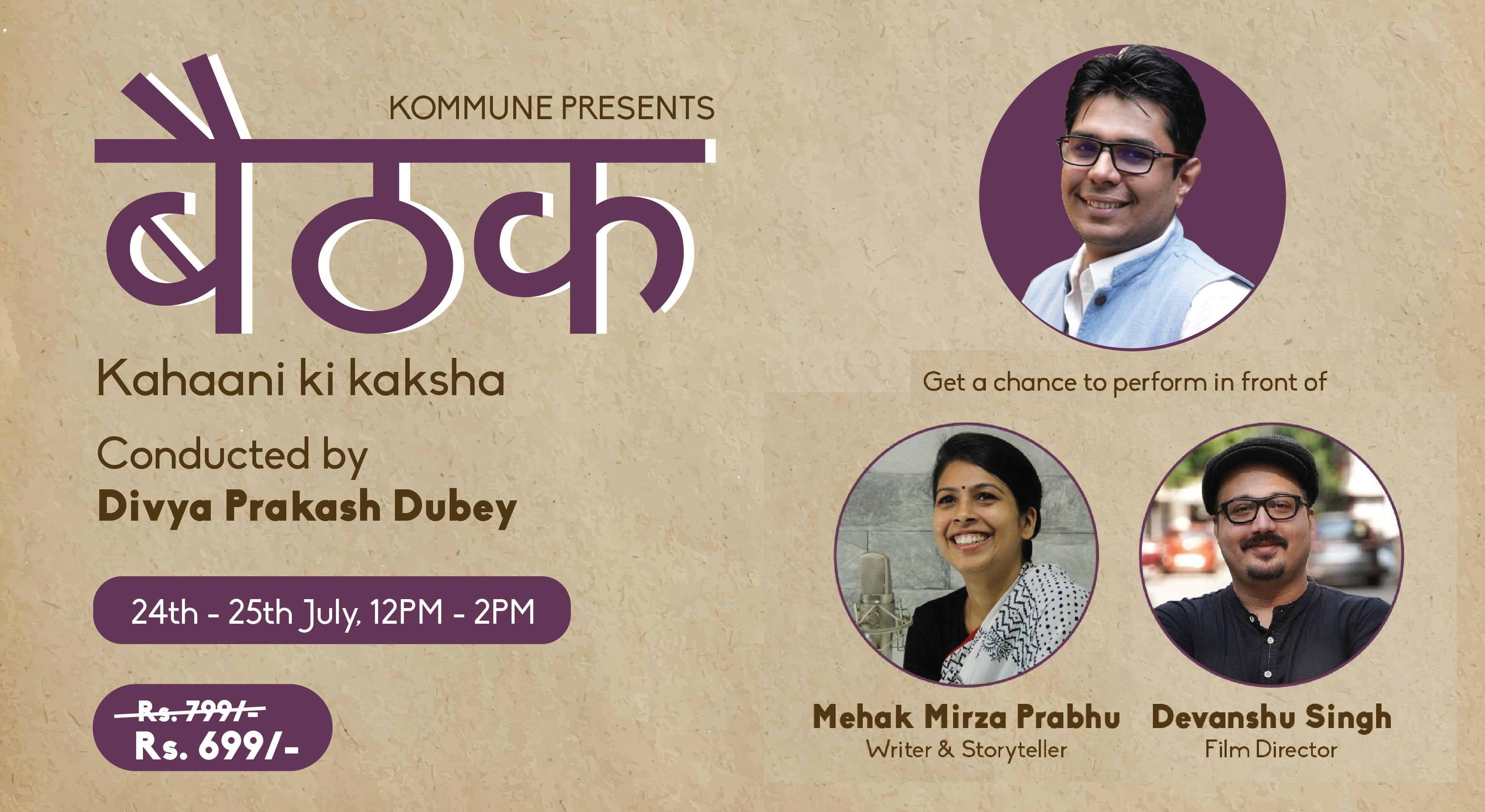 Stories are like light. And light is important in the world so dark.

After an overwhelming response to “Baithak: Kahaani ki Kaksha,” Here we are with the second edition of Divya Prakash Dubey’s class of storybaazi.

Baithak is a two days workshop of story writing and telling, designed not just for the potential storytellers but also for the enthusiasts willing to tell their first story. In these two days you will learn various hacks of storytelling and will be given some amazing and creative exercises to get your creative juices flowing.

These two days will be followed by a peer to peer feedback session and then will finally lead to a main event, where some of you might get a chance to perform your story in the presence of well known storyteller and writer Mehak Mirza Prabhu and critically acclaimed film director Devanshu singh.

About the Conductor: Working on the new art of “Storybaazi” and one of the flag bearers of “Nayi waali Hindi” movement in India Divya Prakash Dubey is an Indian Author and Storyteller. He has written a total of five books as of now namely – Masala Chai, Terms and conditions apply, Musafir cafe, October junction and Ibn-e-batuti. He is the creator of acclaimed audio shows on Amazon Audible, namely – Piya Milan Chawk, Dil Local and Do Duni Pyaar.

Devanshu Singh: Devanshu is a National Award winning filmmaker with a wide range of experience across writing, direction, and production. Apart from co-creating the multiple award-winning short film Tamaash, Devanshu and his brother Satyanshu Singh have also penned lyrics for the indie Sulemani Keeda (2014) and Vidhu Vinod Chopra’s Ferrari Ki Sawaari (2012). The poems featured in Vikramaditya Motwane’s cult classic Udaan (2010) were written by them. He co directed Chintu ka birthday and his latest film “14 Phere” is going to release soon on Zee5.

About Kommune – Kommune is India’s premier platform for great art and great artists, and has built communities of creators across the country. In the last year, Kommune has conducted over 5 bootcamps and pitch fests on podcasting. And has organised over 30 workshops and story slams across various themes and genres.

You know the art, let’s learn its craft together.

This is going to be one exciting learning experience. Book your slot now!!