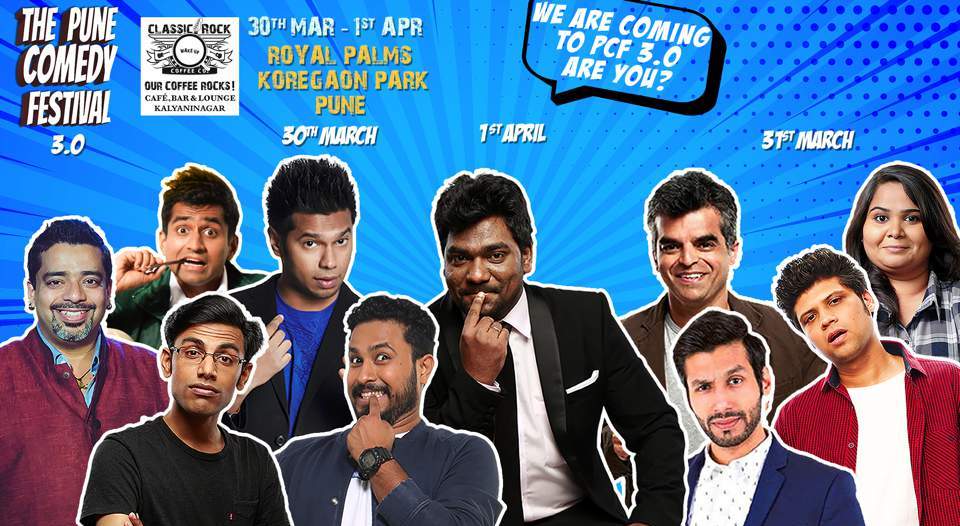 After two mega festivals in the year 2017 which saw over 10k people and over 50 artists performing, Classic Comedy Co. brings to you in 2018, The Pune Comedy Festival 3.0 !

Top comedians performing on each day of the fest are:

We are also very excited to announce that the venue for the PCF 3.0 is the very centrally located – Royal Palms Lawns, Koregaon Park, next to Hard Rock Cafe.

With 30th March being Good Friday i.e. a public holiday and a venue so conveniently located along with more than ample parking facilities being arranged, now there is no reason for you to not be able to attend all three days of The Pune Comedy Festival 3.0.

So tag your friends, make your plans, get people from Mumbai down to Pune to join in and let’s make this the largest comedy festival ever and put Pune permanently on the world comedy map.

Book your tickets for what promises to be a festival for comedy lovers in its truest sense which will also include a curated quirky flea market, bars and food stalls!

The biggest names of Indian comedy are coming to give you the funniest weekend of your life!