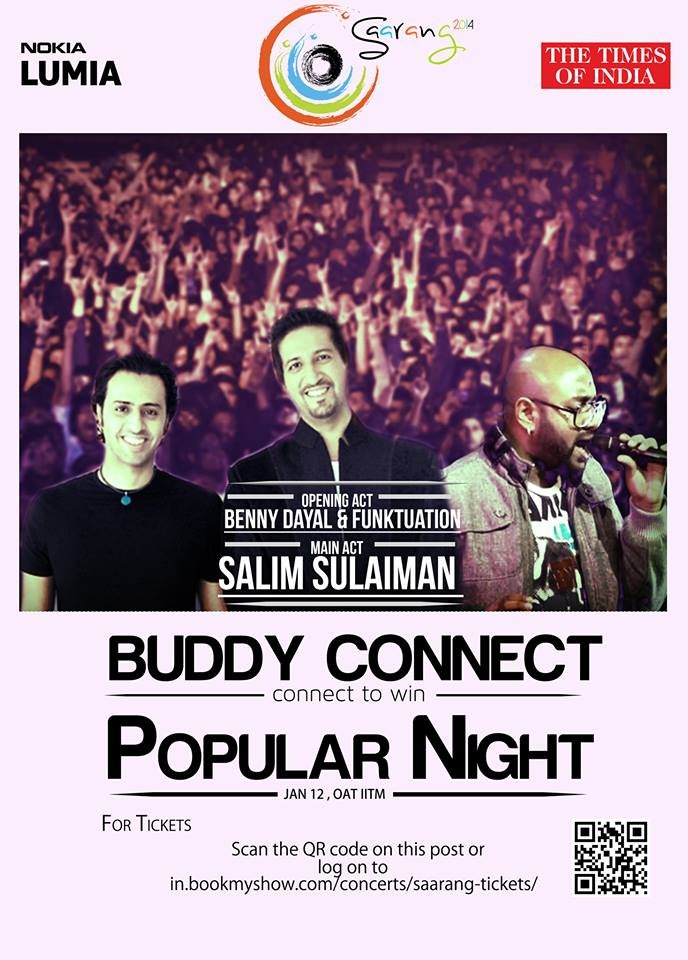 Saarang is the Annual Cultural festival of IIT Madras with a footfall of more than 50,000 each year.

And now, Saarang 2014 presents to you Salim Sulaiman – the musician brothers who have gifted us with movies such as Rab Ne Bana Di Jodi, Kurbaan, Chak De! India, Fashion, Heroine, Aashayein, Ladies vs. Ricky Bahl, Band Baaja Baaraat among others.

They have also collaborated with South African singer Loyiso Bala and Kenyan singer and song writer Eric Wainaina to record the anthem for 2010 FIFA World Cup, ‘Africa, you’re a star’. And of course, Salim Merchant is well known for his ever-so-popular song, ‘Ishq Wala Love’. Having been around for more than a decade, these brothers never fail to make the crowd go berserk with excitement, wherever they perform.

You can never have enough fun at Saarang, and here’s a little extra! Popular Night 2014 will also witness a great performance by Benny Dayal, a great singer and South Indian sensation. Having worked in four different languages, and with great composers such as AR Rahman, Salim-Sulaiman, Vishal-Shekhar, Harris Jayaraj, among others, Benny is not new to entertaining crowds. After all, who can resist to dance to songs such as ‘Pappu can’t dance saala’ and ‘Badtameez dil..’ !

With three headlining acts, all making waves in the scene across the country, coming taking the same stage for the first time ever, the night promises to triple the party.

Starting from the now country wide sensation from last year, Dualist Inquiry will bring in Guitar-driven Electro rock, the pioneer of his one-of-a-kind sound, Nucleya will be dropping Dubstep and Desi Bass, and the party will end with the Sunburn headlining duo Lost Stories x Anish Sood spinning their chart-topping mashups and Sunburn smashing house. The night will be opened by DJ Murthovic.

Three different genres, one night. This is one party Chennai does not want to miss!

He is a pioneer of his unique guitar-driven EDM in the country. After the runaway success at Saarang 2013, the last year has been phenomenal. He released his first full length album: Doppelganger, headlined at the nH7 Weekender (Pune), started his own band as a live project and has grown into one of India’s leading electronic music producers that the country just can’t get enough of.

Nucleya:(Dubstep, Bass, Desi) https://www.facebook.com/nucleya
Bringing the Desi Bass to Saarang, Nucleya is one of the most unique acts in the country. With albums including ‘Horn OK Please’ and tracks such as Akkad Bakkad, New Delhi Nuttah and Bangla Bass, his music is a fresh mix of desi beats and solid dubstep.

He has featured on the MTV television series The Dewarists, opened for David Guetta during the Eristoff Invasion festival and is playing at the nH7 Weekender (Delhi) this year.

Ending the party Sunburn-style, we present the duo that have taken parties across the country by storm and are headlining at Sunburn Noida, Sunburn Mumbai and Bangalore this year.
They have played alongside some of the biggest international names like David Guetta, Steve Aoki, and Fedde Le Grand, to name a few.

Murthovic:(Techno/House) https://www.facebook.com/murthovic
Author, fuser, educator, creator – DJ Murthy has over a decade’s experience in the industry. His own celebrated brand of music is a variant of tech-house, progressive and techno with influences found in the rhythmic beats of soul, funk, disco and crossover sounds. He has opened and played alongside acts like Tiesto, Dave Seaman, Stephan K, Graham Gold, Dale Anderson, Jerome Isma-ae, Freaky Disco, Jody Wisternoff (WAY OUT WEST), Infected Mushroom and Djuma Sound system to name a few and is also founder/partner of Frequency, a growing underground dance movement born in Hyderabad.

So are you ready to make some noise this January?